While being around an amazing bead embroiderer (if that's a word) that happened to be one of my fellow Creative Circle Ambassador's, back in February, I was inspired to give it a try.  Thanks Dawn Doucette (Bella Amore Legacy Jewelry).  Just another insane obsession to add to the long, ever growing list I already have.

When I got back home from the Cousin Creative Circle Ambassador Retreat, I made a beeline to my local Gem and Mineral Show.  I picked up a few cabochons to play with. 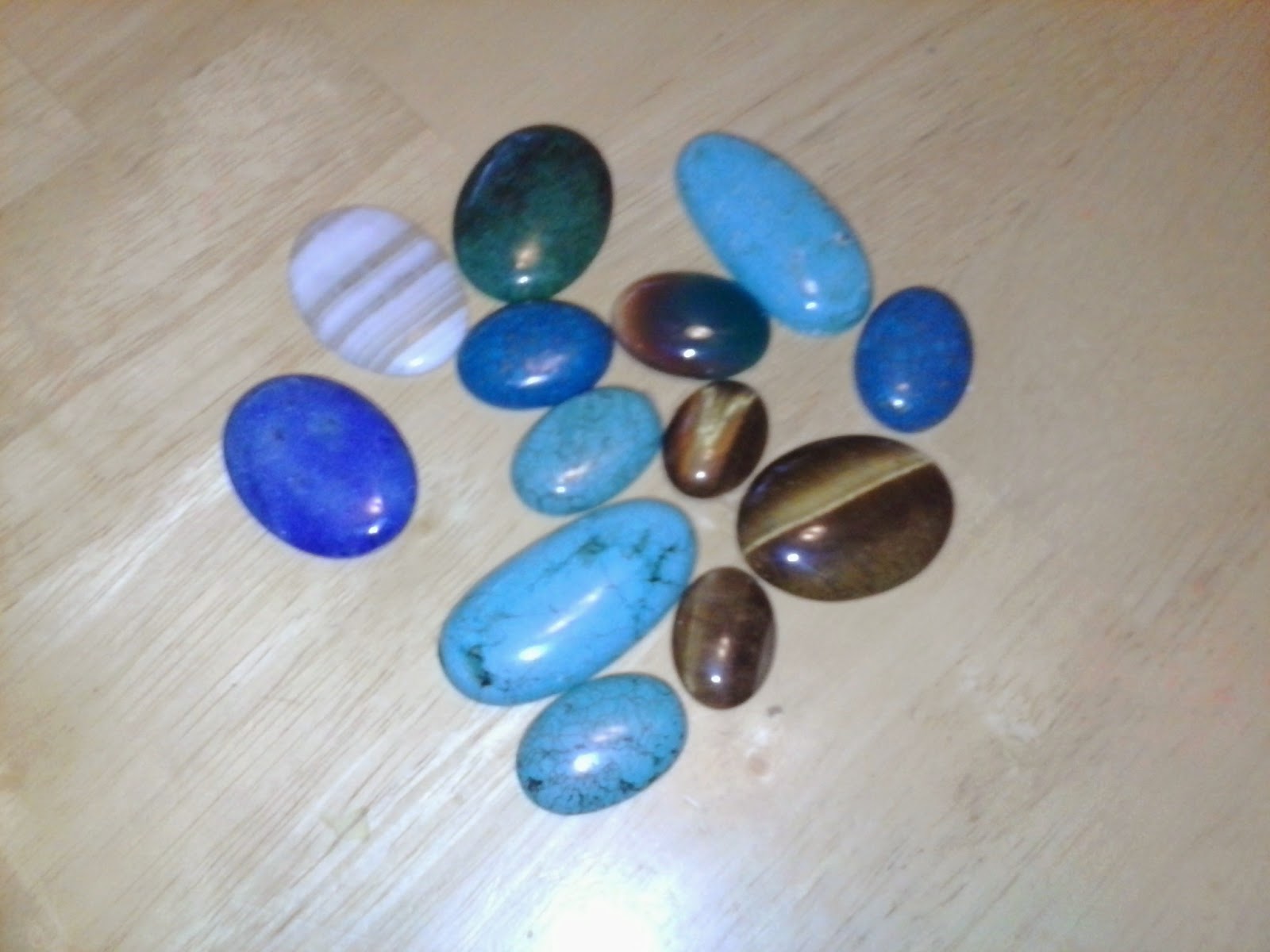 I went to Jo-Ann's looking for stiff felt, but they didn't have anything stiff enough to hold up.  So I ordered some on the recommendation of Dawn, again, from Nicole Campanella's website, Beadwright. Her stuff is really nice and comes in some really great colors that compliment your stones rather well.

Anywho......I picked out three stones that went well together and got started.  I glued the stones down to the felt with E-6000 and trimmed down the felt. 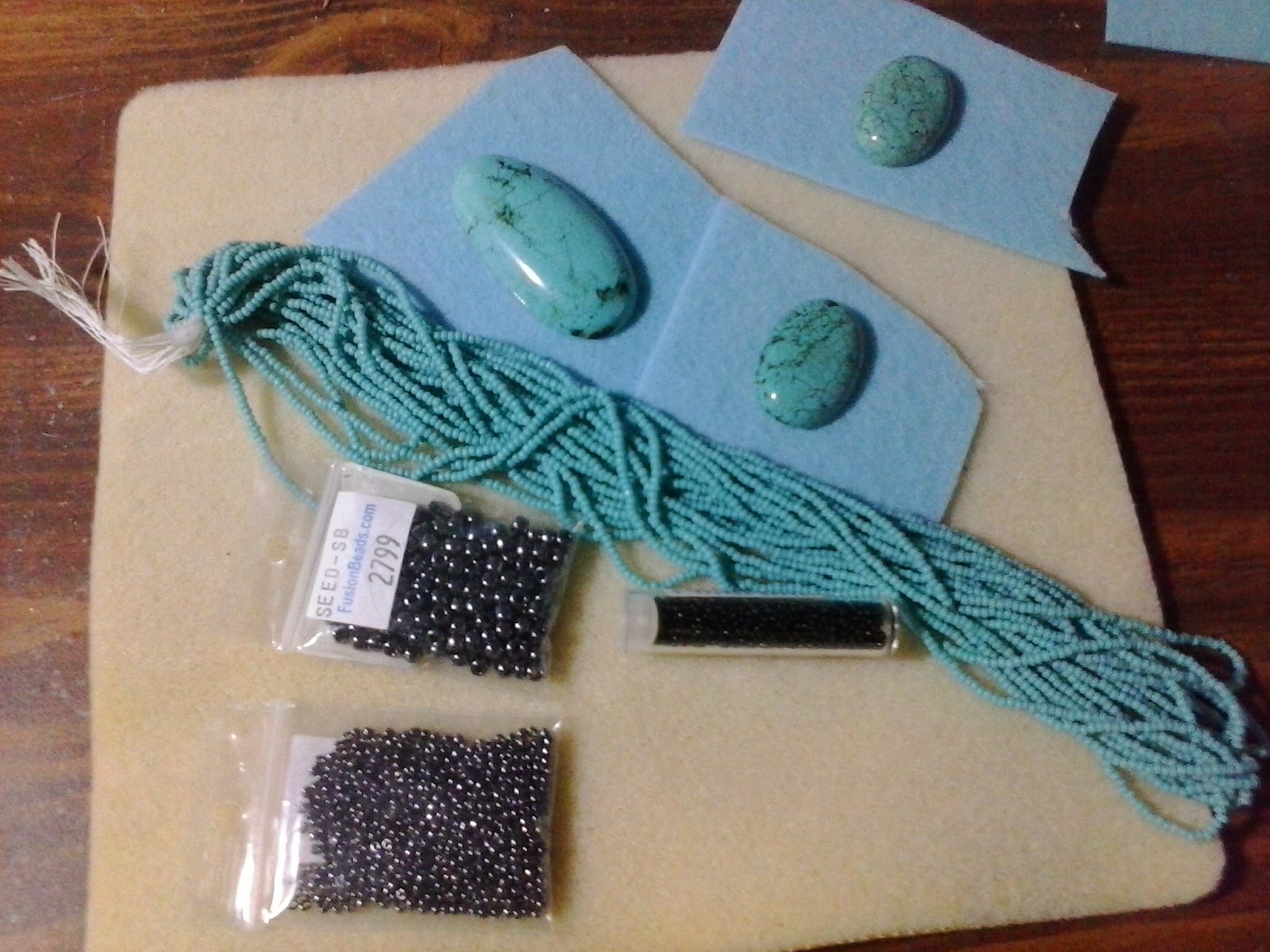 I gathered by supplies, some Czech glass seed beads I had picked up at the Gem and Mineral Show, some Toho from Fusion Beads, Miyuki seed beads from Jewelry Supply, sharp scissors, beading string, leather for backing, and beading needles.  I used Beadalon's Wildfire beading thread, but I did discover that Berkley's Fireline works way much better.  Good to know for next time.  The leather I purchased from Michael's for $6.99 a piece.  It's a pretty big piece.

Then the beading started. 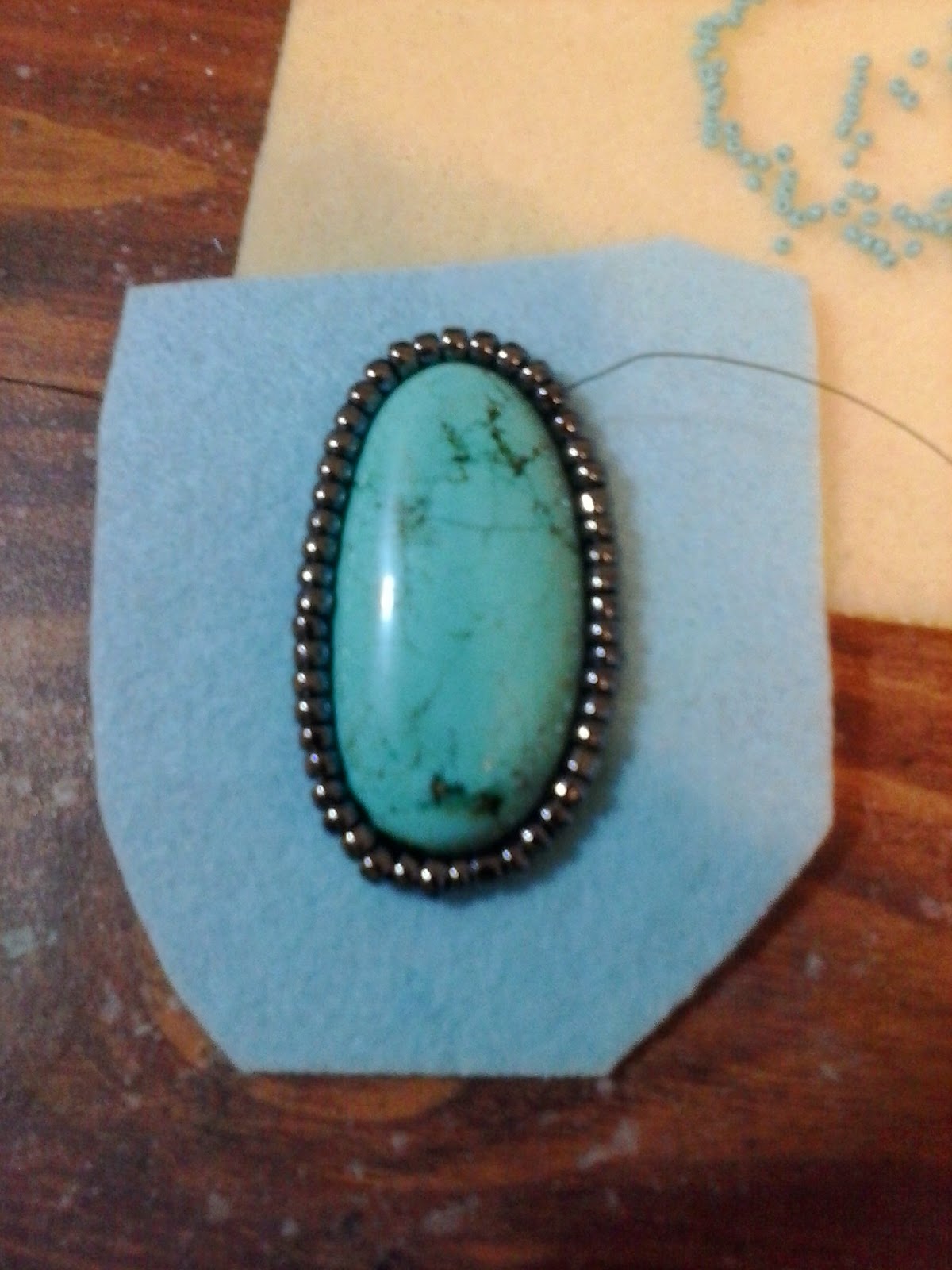 First row was done and then I realized that my stone wasn't exactly perfect on all sides.  It's a bit lumpy on one side.  Oh, well.  To late now.   I just kept going.

I ended up doing four more rows atop the stone and then went back and added a outer row of 3mm round silver plated copper beads before trimming and gluing the foundation to the leather. 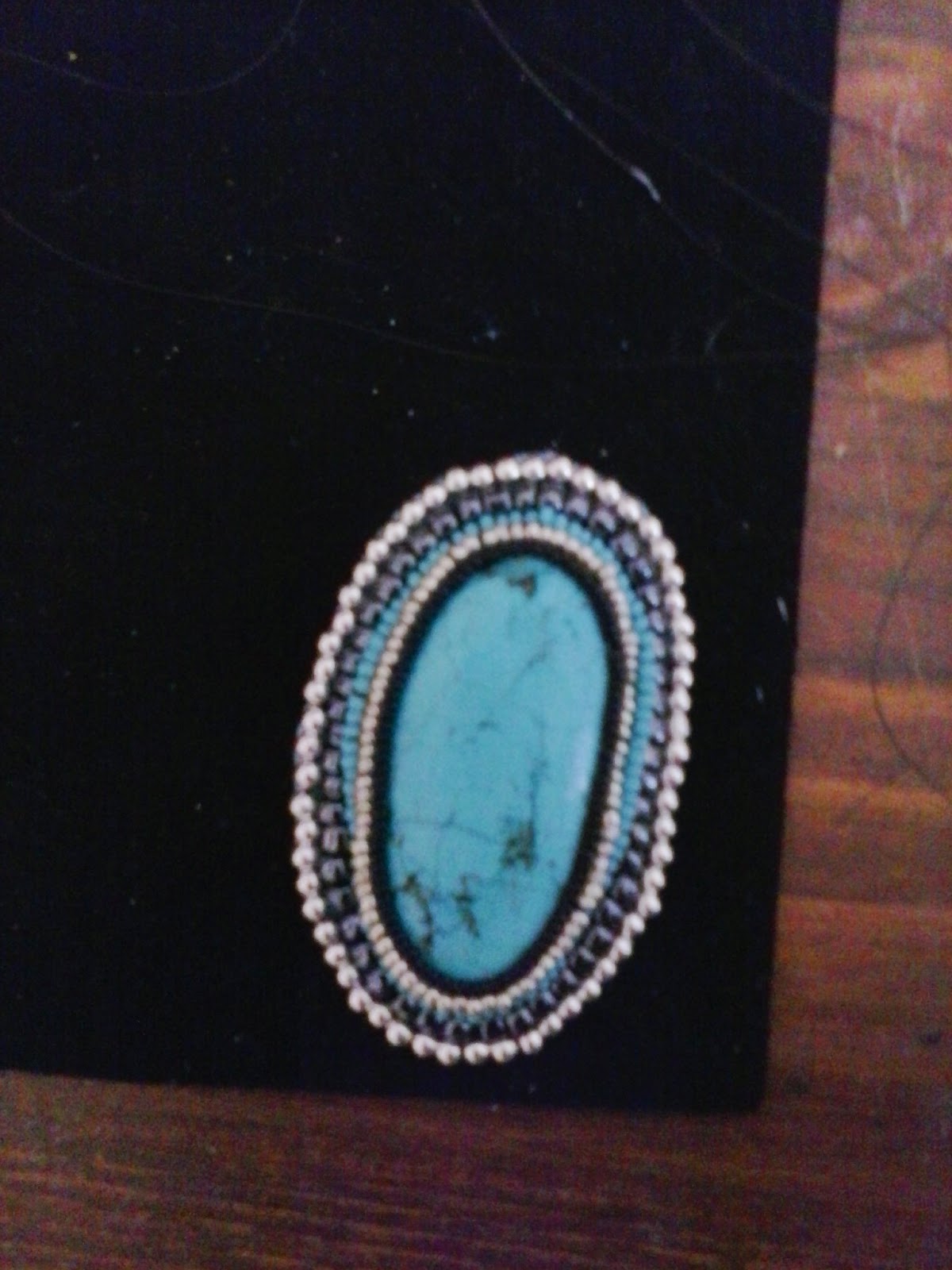 Here is what the untrimmed focal looked like after adding the outer silver ring of beads.  After I trimmed it, I added a row of the turquoise seed beads to hide the edge.

I moved on to the smaller stones and then attached the embroidered pieces together with 8mm round genuine turquoise beads I picked up at the Rock Man and Gemstone Lady in Longbeach, gunmetal 8/0 Toho beads, and 2.5 mm silver plated copper beads.

After I beaded around it all, the color of the stones seemed to transform into something very lovely.  They went from bland and unexciting stones to knock outs. 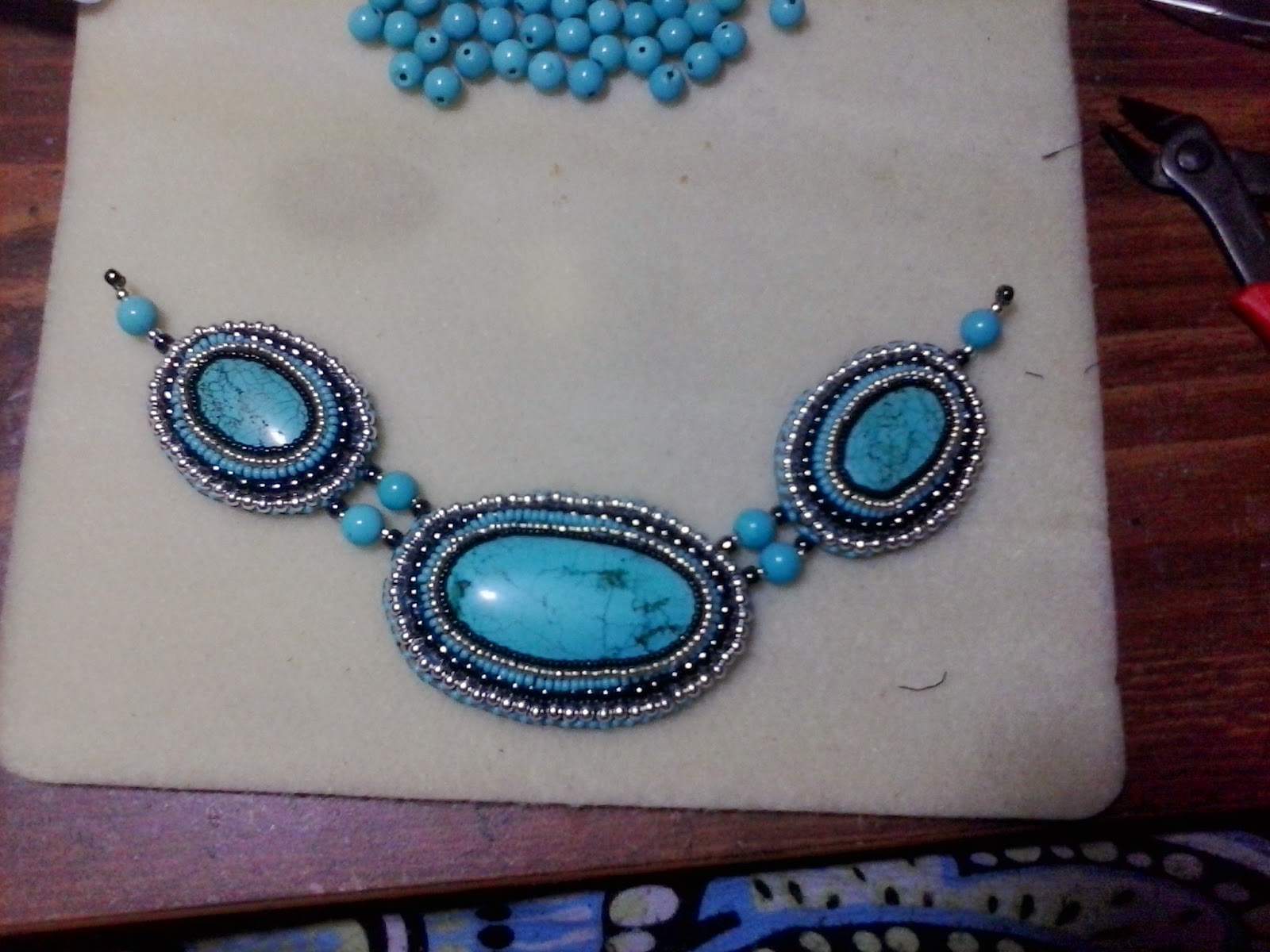 I added a place to attach it to the rest of the necklace that I was going to create.  The plan was the use gunmetal enameled copper jump rings to attach it to a chain. I changed my mind when I sat down to finish it.  I used more beading thread to create a unique strand for the back. 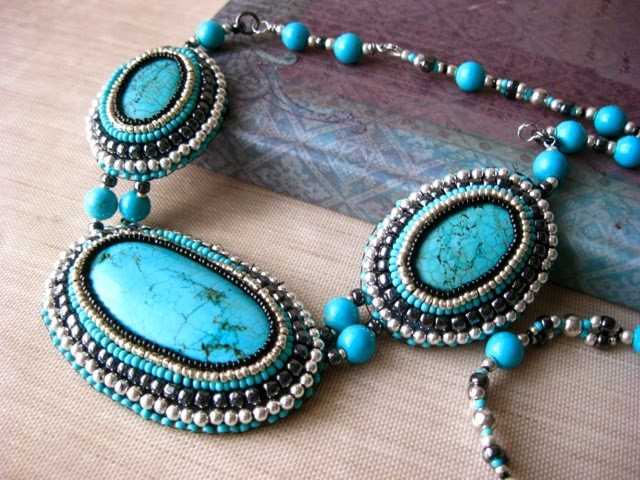 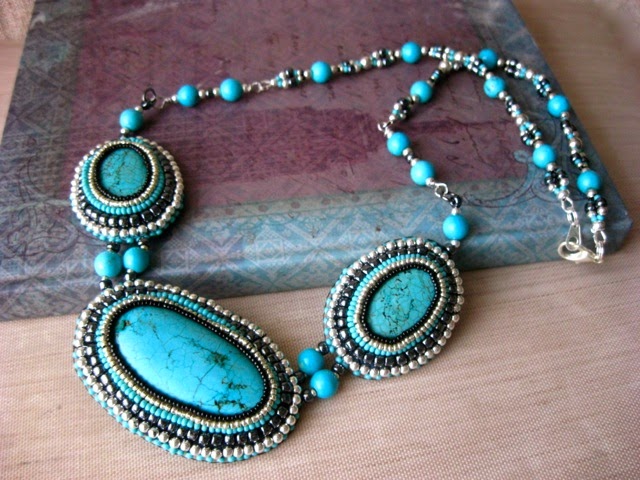 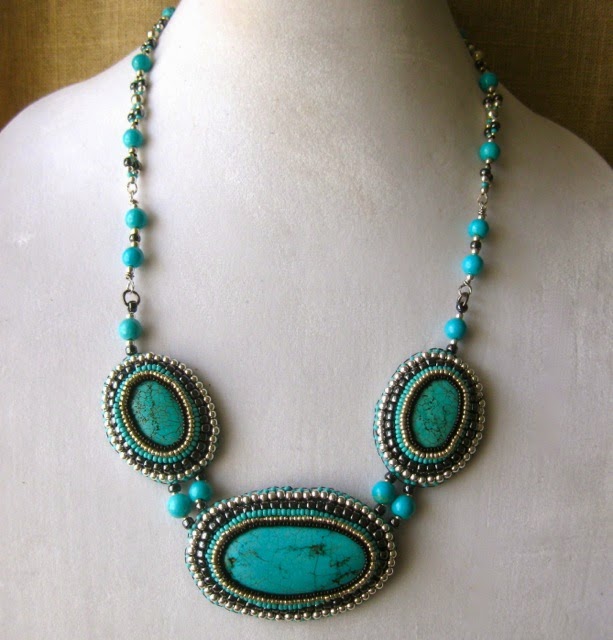 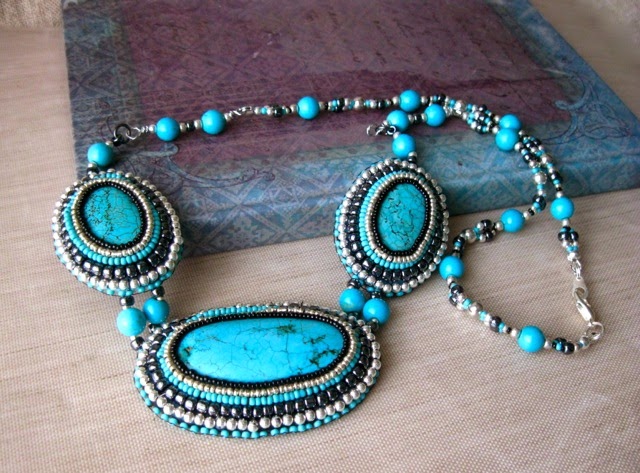 Finished piece that will be given to my mom for her 68th birthday. Total time working on this piece was 18 to 20 hours.  Well worth it.  I think I have now descended into a little bit of insanity, because I want to do more of this.  Unfortunately, my hands and wrists are screaming at me.  They are super sore and stiff from the weaving of the beads.  Now I remember why I quit beadweaving in the first place.  LOL....back to the madness.
Posted by Unknown at 11:35 AM